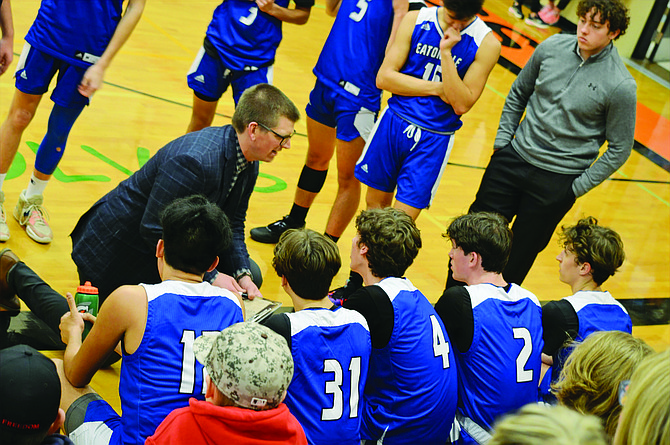 Despite their efforts, the Cruisers couldn’t seal the win when they headed to Morton-White Pass Dec. 19 as they tried to make up for their earlier loss to the Timberwolves. Unfortunately, the T-Wolves had the Cruisers' number again as they downed Eatonville 95-70 in a non-league affair.

The 13 three-pointers Eatonville hit were not enough to counter Morton-White Pass’s Josh Salguero, who dominated in the paint with 34 points on the night. Despite Hunter Hazen's 21 and Jake Cournyer's 18 points, the Cruisers just didn’t match up well against the T-Wolves.

Salguero scored 24 of his career-high 34 points in the first half while Hazen and Cournyer carried the load for the Timberwolves in the second half.

Shay Brannon led the Cruisers with 22 points, 18 of them coming from beyond the three-point arc.

Following that loss, the Cruisers welcomed their rivals, the Orting Cardinals, Dec. 21, and they snapped their two-game skid by thrashing the Red Birds, 70-33.

"We grew so much playing such a competitive team as Morton-White Pass,” head coach TJ Cotterill said. “It's hopefully an experience we'll continue to look back on throughout the season in terms of what playing tough, relentless, together basketball must look like.”

After a close game early on where the Cruisers took a 6-point lead into the second quarter, they turned up the energy a notch and limited their rivals to six points in the quarter while putting up 21 points of their own to take a 39-19 lead into the locker room at the half.

"It fueled us tonight,” Cotterill said after the game. “We know the competitiveness we must bring each night if we're hoping to achieve our goals and be where we want to be by February.”

The Cruisers currently have a 2-3 record and will travel to Anchorage, Alaska, to compete in the Clarke Cochrane Christmas Classic tournament this week, where they will play three games. Their first game against Lathrop High School out of Fairbanks, Alaska. Their other two games will depend on how they fare in the first.

After the Cruisers return from their trip, they will head into conference play when they host the Montesano Bulldogs at 7 p.m., Jan. 6.